I have decided to take the plunge (actually a flight in my case) and go to the VitiNord 2012 conference in Germany and Poland.  The lineup looks so exciting I can hardly wait!  Hopefully I can meet people from around the world that can help make my viticultural wish come true - harvesting ripe grapes in Interior Alaska!  So far for the winter, the grapevines are looking good. I just have to keep mama moose away from them. Chica has been helping me out with that task.  She barks at them whenever she hears them.  Oh well for the neighbors.
In preparation for the trip, I am rounding up things I can sell to get some extra money together.  Tonight Chica helped me clean out my 1988 Honda.  Actually, she sat in the back seat the entire time like she was waiting for a ride.
I have been trying to harvest highbush cranberries (Viburnum edule) to make some wine out of.  I need about three pounds.  It is really slow picking, especially since the birds have already picked over the shrubs and they don't produce that much to begin with.  I found a patch of them amongst the stumps  of poplar trees that I cut down three years ago.  They really like full sun and plenty of moisture.  Since they are native here, I am going to try to encourage that patch to grow more.  Maybe thin some out and apply plenty of mulch.  I probably have 1/2 a pound of berries right now.  I know where there are other patches in the hills around town, but it could be very time consuming and the sun already is setting at 5:30pm.  I might try just around the subdivision here.  If I can harvest enough cranberries, I can make the first official batch of wine at "Crest View Winery".  I thought that was a fitting name considering the view I have.  Here's the banner for the webpage when I get around to it:

Snowfall has been sparse, with only about 3 inches on the ground now.  Temperatures haven't gone below 0F however, so I think most of the balckberries are okay for now.  Hopefully, we will get some soon - before the -20s hit around Thanksgiving.
Posted by Aaron Stierle at 8:07 PM No comments:

Well, it is "official".  Winter has arrived.  We have a snowpack of 4 inches (10 cm) and temperatures consistently below freezing here at the farm.  That is enough snow to cover some of the trailing-type blackberries (Silvan and Boysenberry) - and right on time as the lowest temperature so far has been 14F (-10C).  We will see how the blackberries and new raspberries fare next spring.

A few stats from this summer:
The growing season was a little shorter than usual at 115 days (May 15 thru Sept. 8).  About 12 days shorter than we typically see.  We accumulated 716 growing degree days (base 50F; 398 - base 10C) and 1823 growing degree days using a base of 41F  (1013 - base 5C).  May and June were typical, while July and August were a little cooler than normal.  Summer was fairly dry, but here in the hills we pretty much caught up on rainfall in September.

I was hoping to go to VitiNord 2012 in November, but it looks like I won't be able to go after all.  It is an international conference on grape growing in regions with cool summers and cold winters and brings together researchers numerous countries.  It is much more pertinent to my efforts here at Solitude Springs Farm & Vineyard than any other including the cold climate conference in Minnesota in February.  VitiNord occurs every three years, so maybe next time.  Perhaps by then I will have produced some grapes (I am hopeful for next summer!)

I'll leave you with a picture or two. 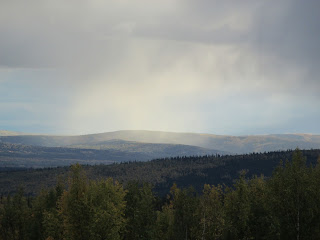 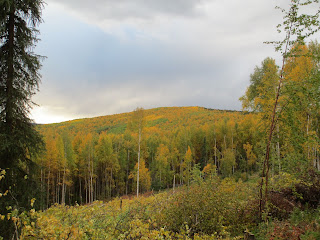 Fall picture from the top of the driveway looking southwest.
Posted by Aaron Stierle at 9:01 PM No comments: