Well, we finally got around to updating the website.  The variety list now includes some discussion on the merits of different varieties and a little on this past year's successes and failures.  We have yet to schedule the next workshop, but it will include a presentation by Victor Johanson on hugelkultur, a representative from the cooperative extension on the construction of root cellars, a little about growing fruit in our area, and as usual a Q&A on gardening in the Goldstream Valley and surrounding hills.  I hope you find it well worth the Sunday afternoon to attend!!
We have been babying some Vitis amurensis (grape) seedlings that we sprouted last spring.  Most made it outside midsummer and acclimated quickly to our climate.  A few were too small to put out, so we left them inside the house.  They finally went dormant in October.  When I was looking around two weeks ago, I saw some green buds on one.  This is what is so interesting: most plants require a certain number of hours of cool temperatures (between 45F and 25F) to break dormancy.  This "trick" allows plants to weather warm and cold periods during the winter without budding out prematurely.  However, V. amurensis doesn't require very many such hours.  It evolved in southern Siberia, where winters are notoriously cold and long, with very few midwinter warm spells.  On the other hand, the southern Siberian summers are short and come on quickly.  It is beneficial for V. amurensis to break dormancy quickly as soon as the temperatures begin warming in the late spring.  Such conditions have been the norm here at the farm and we have been looking for grape varieties that bud as soon as things warm up.  Unfortunately, most grape varieties are bred for warmer climates where winter temperatures fluctuate quite a bit.  With the rapid decrease in temperatures in the fall and rapid increase in the spring, plants at the farm (and around Fairbanks in general) do not accumulate enough hours between 25 and 45 degrees fahrenheit until sometime in June.  Consequently, grapevines are slow to bud out in the spring. We have found a few that do well, but most just sit and do nothing until mid to late June.   By then, summer is half over!!!  The other five seedlings that have been in the house as well are either just starting to bud out or have not budded at all.  So, we will keep an eye on this early one and see if we can use it to breed new varieties of grapes.
Now for a quick climate summary for 2013.  The high was 85F on June 25th and the low was -31F on January 27th.  The average temperature was 30.1F.  We accumulated 1049 growing degree days (GDD; base 50F), which equates to 583 GDD base 10C.  This was well above our average of 750 GDD base 50F.  Our growing season extended 117 days from May 21st to September 15th.  There were 8 days where the temperature rose to 80F or higher, and 70 days where it fell below zero.  Winds exceeded 60 mph during the week before Thanksgiving and exceeded 50 mph the first week of December.  Rainfall came out to about 6 inches for the summer (down from about 8 inches), but snowfall was about average at 100 inches.  Our current snow depth of 23 inches is also average.
We are looking forward to the new year and what we will learn next summer. Be sure to follow along as we continue on with our great experiment!
Now for some pictures: (1) Duke this summer, (2) Leon Millot after veraison in September, (3) early bud break on V. amurensis, (4) 2 ft of snow on the bramblery. 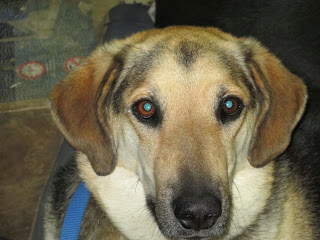 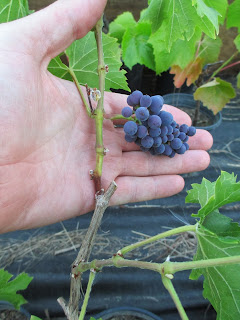 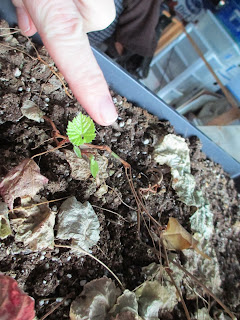 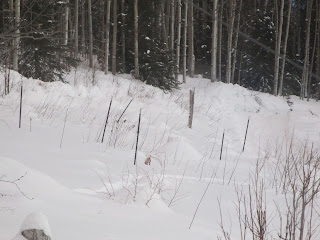 Posted by Aaron Stierle at 10:34 PM No comments: