Last summer was a warm one, with numerous days topping 80F (27C). It was also on the dry side. The farm received 2.88 inches of rain (73 mm) during the three month period May through July. In the past, we assumed grapevines didn't grow much during the summer here because it was too cold - both the air and ground temps. Well, this year when we saw a string of very warm days and warm nights, we were puzzled to see the grapevines not growing more than they had in past summers (rainy or not). So, we contacted a very knowledgeable grape grower in Wisconsin. He asked how wet the ground was. WHAT? I thought grapevines didn't need water in places where it rains in the summer. Wrong!!! Research revealed that each vine requires 6-10 gallons of water each week, or an inch of rain. Well, we never get that much rain before August - and then the vines are starting to shut down. So, we started pouring water on a few vines to see what would happen. Our Arthur Pinchbeck (Canadian variety) vine literally took off! In 5 weeks it grew 5 ft - compared to 1.5 ft (0.5 m) last summer. Who says grapevines won't grow in Interior Alaska? At the end of the season, it was taller than me. It still remains to be seen how much of the vine hardened off sufficiently for the winter, but we're hoping for at least 3 ft. (1 m). 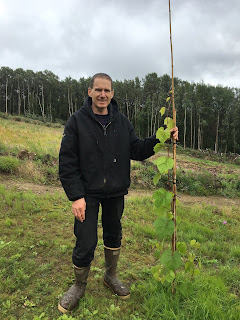