Well, I'm getting ready to leave in the morning.  I put up a makeshift fence around the area I have my trees and bushes in (in their pots) that will hopefully deter momma moose and her new calf from browsing the new growth.  With all the trees I cut down this fall, it's not like there isn't anything else to eat.  Chica chased them off last night and they were back this afternoon working on the downed trees.  They were probably watching me put up the fence and (quietly) laughing to themselves.

Chica appears to have settled into her new routine fairly well - as long as no other dogs are vying for attention she feels she should be receiving. I hope everything goes okay.

Up to this point we in the hills have endured about 9 days of high winds (20+ mph).  With the newly expanded clearing, I am seeing significant wind sculpting of snow.  Kind of pretty, but I worry about the potential for drifting snow, which up to this point hasn't been an issue.  The good news so far is that temps have been relatively mild (only to -9F, -22C) here at the farm, while some outlying areas have already seen near -40F/C.  We still don't have much of a snowpack, just 7 inches (18cm).  It is enough to cover all of the trailing blackberry vines and the Triple Crowns.  I'm hoping for a good crop of blackberries next year!

I'll leave you with a few recent pictures. 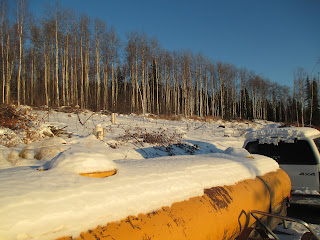 Early winter snowcover on the bramblery 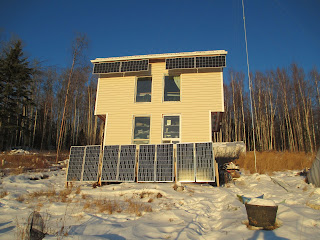 Sunshine has been so plentiful I haven't had to run the generator yet. 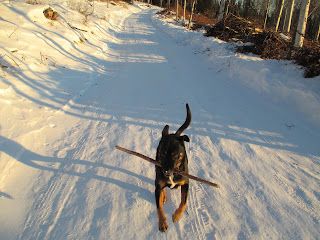 Chica enjoying a game of "stick" - her version of fetch, the longer the stick the better!
I'm already starting to miss her!