We have just posted our 2015 Spring Farm Tour on YouTube!! You can view it at: https://youtu.be/E2jr6_Cvv6M

An update on the blackberries: not only have the wasps found them, but our resident porcupine has found the new growth, as well. We will need one tremendous fence (for moose and porcupines and any other blackberry-loving critter) and lots of row cover (to protect from wasps when they are prolific) to protect them.  I've tasted 3 unripe Silvans and lost probably another 10 to wasps and voles.  Tomorrow we plan to cut all fruiting canes off of the Silvans and bring them in the house to ripen.  And, the first Wild Treasure blackberry turned black today.  If I can keep the wasps away from them, we might have our first ripe Wild Treasure blackberry in 10-14 days.  You might ask why we don't just kill the excess wasps.  Well, we have a theory that the wasps keep the lygus bug population in check.  This is important, because lygus bugs resulted in almost a complete peony crop failure last year in Interior Alaska and from my posts you probably know they have quite an appetite for blackberry plants, as well.  In fact, we saw several adult lygus bugs and two nymphs earlier this summer on Wild Treasure and Marionberry and were worried about extensive damage from them, but nothing really happened and we have not seen any since.  Wasps are known to prey on insect pests (and certainly can become pests themselves), particularly those that suck plant juices, such as aphids.  Until last year, there had not been any damage to peonies from lygus bugs for more than 6 years (when the first peony farms began producing commercially).  However, in May 2013, we had a late winter with snow and cold temperatures extending beyond May 20th.  That year saw a dismal wasp population.  The following spring and summer (2014), the lygus bug population exploded! We are still researching the specifics of the lygus bug life cycle, but overwintering adults (that were nymphs the previous summer and fall) may be very important.  A lack of wasps may have allowed more nymphs to mature into adults that laid eggs in the spring of 2014.  Those eggs produced very hungry nymphs that really hit the blackberries and peonies hard.  Later last summer, with a more average wasp population, fewer nymphs survived and yielded fewer overwintering adults to lay eggs that would have hatched this spring.  For now, that is our theory and we're sticking to it.

We are hoping to get a summer tour video out before September that shows our newly planted terraces and the start of a food forest.  We may have to wait until next year to show the pond we plan to put in - unless it makes it into our planned fall farm tour video.
Posted by Aaron Stierle at 11:06 PM No comments:

Okay, so we neglected to announce when we posted our video of the farm in winter on YouTube.  It is there for your viewing pleasure.  We are currently putting together some video from mid-April for a spring farm tour.  That will be posted to YouTube, as well. You can follow the link below or search for the "Solitude Springs Farm & Vineyard" channel.  And, once some of our blackberries begin ripening we will shoot a short video of the farm in the summer.  You guessed it!  There will likely be a fall video, as well.

We have 12 terraces in - about 1/4 of the total amount and have started planting on them.  It has been raining today (finally!) and put a damper on our planting plans, but hopefully we can continue tomorrow.  There are 260 Duchess de Nemours peonies that need to be planted immediately.  We have three 50 ft. rows of raspberries in.  Peonies and Wild Treasure blackberries are next.

In the bramblery, Wild Treasure and Silvan are nearing harvest time.  We played around with covering them with row cover this summer and, with the help of a warm May and June, have hastened ripening by about 3 or 4 weeks.  In fact, the first Silvan berry has already turned purple.  This is very early considering that last year Silvan flowered on July 15th.  Wild Treasure flowered 8 days earlier this year than last and by July 15th over 60 flowers had already bloomed - compared to 14 last year.  There would have been more flowers, but last fall was tough on the blackberries with little snow cover until early November.  Consequently, only about 20% of last year's growth on Wild Treasure survived the winter.  Marion isn't doing too bad this year either.  From a 3 ft long cane and two bottom laterals, it has produced several dozen flowers, many of which are still waiting to flower.  We should get some berries off of it, but not sure what the final count will be.

Many of the grapevines have resprouted from the roots and it looks like not too many were lost.  However, again this summer it appears there won't be enough time to plant them on the terraces as we still have quite a bit of earthwork to do before their space is ready.  We have decided to try putting in a pond at the bottom of the lot to provide water during the dry months of May and June.  With several thousand plants in the ground, the demand for water will dramatically increase.

We are also considering putting in a food forest to the west of the house.  The area is currently covered in poplar saplings and high bush cranberries.  We hope to put in fruit and nut trees and serviceberries amongst the cranberries.  However, this area won't be terraced in the traditional way, so it remains to be seen how we will provide water.  Stay tuned. 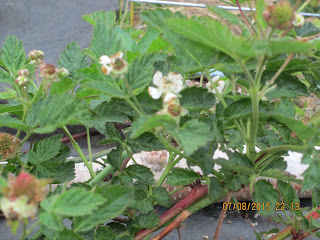 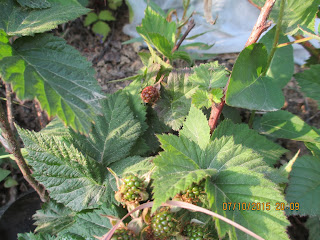 Posted by Aaron Stierle at 8:13 PM No comments: