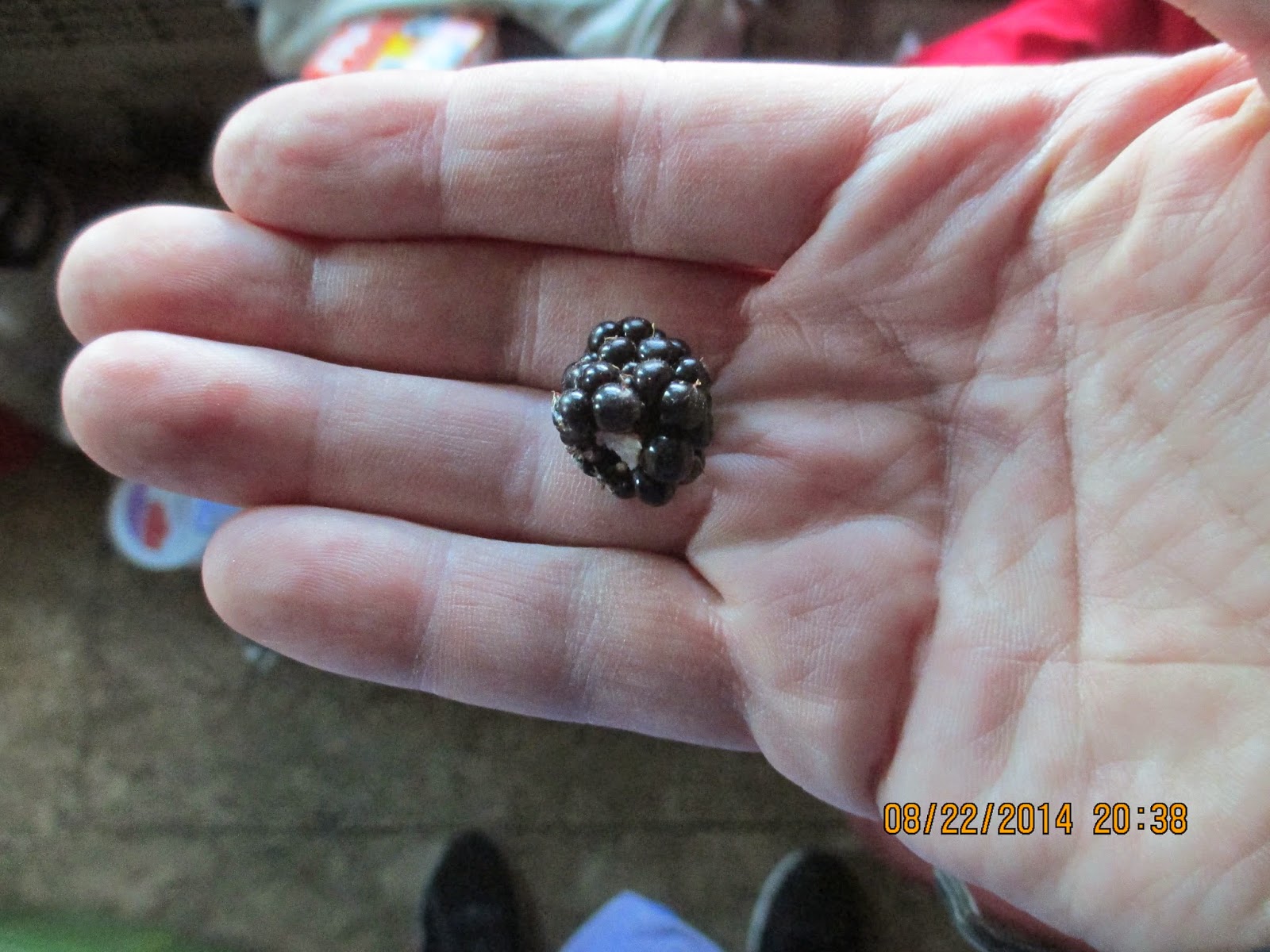 We got to taste our first ripe Wild Treasure yesterday . . . and followed up with a second today.  All that can be said is WOW!  So different from blackberries you buy in the store.  There is an explosion of different fruit flavors initially, including plum, raspberry, cherry, and blackberry, followed by a long strawberry finish.  Looks like about a dozen will ripen off of about 2 ft of cane.  There are many other berries - and flower buds, but they will be damaged by frost before they ripen.  Next year we will look into getting WT to flower earlier, so it begins ripening earlier and can yield a larger crop.  We played with putting black weed block under one side of a plant and found that primocane growth is increased substantially over this material.  We may have a cane that approaches 10 ft long this year.  Keeping the voles (and mama moose) away from it will be the goal - along with protecting it from the cold.
Tonight was our first night of the season selling produce at Murphy Dome Rd. and Jennifer Dr.  Had some beautiful heads of lettuce, a little spinach, and a few zucchini.  We may have a few Wild Treasure blackberries to sample at a future date - if you can beat me to them!
Posted by Aaron Stierle at 12:12 AM No comments:

Produce Sales to Start This Weekend!

We will be out at Jennifer Dr. and Murphy Dome Rd. Saturday evening 4ish to 7ish.  We will have leaf lettuce, spinach and zucchini.  I guess we know what grows even in the cooler years on the farm.  We should also have some raspberries, but not sure what color or kind yet.  Prices will be lettuce=$3 each, spinach=$6/lb, zucchini=$0.50 each, and raspberries=$10/lb.
Blackberries are still struggling with the cool temperatures - and the moose! Mama moose found the blackberry patch last weekend and she has stripped much of the leaves and tips off the primocanes of several varieties (including our super vigorous Siskiyous).  If we can get a fence up around them, most will recover and just be very bushy next year.  Without long primocanes on the Siskiyous, it will be difficult to train them next year and separate the fruiting canes from next year's primocanes, but we may get a larger crop off of them.  We are attempting to protect Wild Treasure and Black Diamond by laying floating row cover over them - and crossing our fingers.
Posted by Aaron Stierle at 11:25 PM No comments:

Tasted the first Prelude red raspberry today.  Quite tasty, indeed.  Prelude is a very early season raspberry in the Lower 48 and it appears to be early here, as well.  Boyne and Cascade Delight are probably a week or two away from ripening.  They and the other berries are about two weeks behind this year due to our cool and rainy (another inch Friday and Saturday) summer.  As of the end of July, we had only accumulated 450 growing degree days (base 50 F).  This is about 100 less than we usually have by the end of July and about 250 behind last year.  Unfortunately, our frequent heavy rains and cool temperatures have also upset pollination.  Several early flowering berry varieties have very poor fruit set this summer.  Cascade Delight has some developing berries, but many of the flowers didn't pollinate.  Boyne suffered similarly.  Other varieties that flowered a week or two later (Willamette, Meeker, Cumberland black raspberry) have very good fruit set.
Similar problems with fruit set seem to have affected the blackberries, but we are not sure if that was partly due to the application of diatomaceous earth we used to get rid of Lygus bugs that were eating the blackberry flowers.  Bees avoid diatomaceous earth.  Anyway, we found a Wild Treasure blackberry starting to turn red today.  By next weekend it should be turning black! And several berries on a Siskiyou blackberry have swelled to full size.  I think we'll start seeing lots of red and black (and yellow) in the coming days!!!  My mouth is watering just thinking about it.  Who knows, maybe next year we can enter some blackberries in the Tanana Valley Fair.  That would be awesome!
Other fruits that are just now ripening include honeyberries and strawberries.  Tasted the first Blue Belle honeyberry on Saturday.  Very soft, but oh so tasty! The Hood strawberries are also tasty.  Unfortunately, we don't have enough of either of these to share this year.  And if Chica keeps raiding the raspberries, they may be a little hard to come by, as well.  I caught her eyeing the Preludes yesterday.  She has acquired a taste for them.  I've considered planting a patch for her.
We have some spinach and leaf lettuce that we will start selling at the gravel pit at Jennifer Dr. and Murphy Dome Rd.  The time has not been set yet however, because my day job work schedule is not as flexible as it was last summer.  We will probably try to be there on Saturday evenings.  Not ideal by any means, but it will have to do.  We will post again before our first day.
I'll leave you with a picture of our Anthony Waterer Spirea that is now in bloom. Gorgeous color! 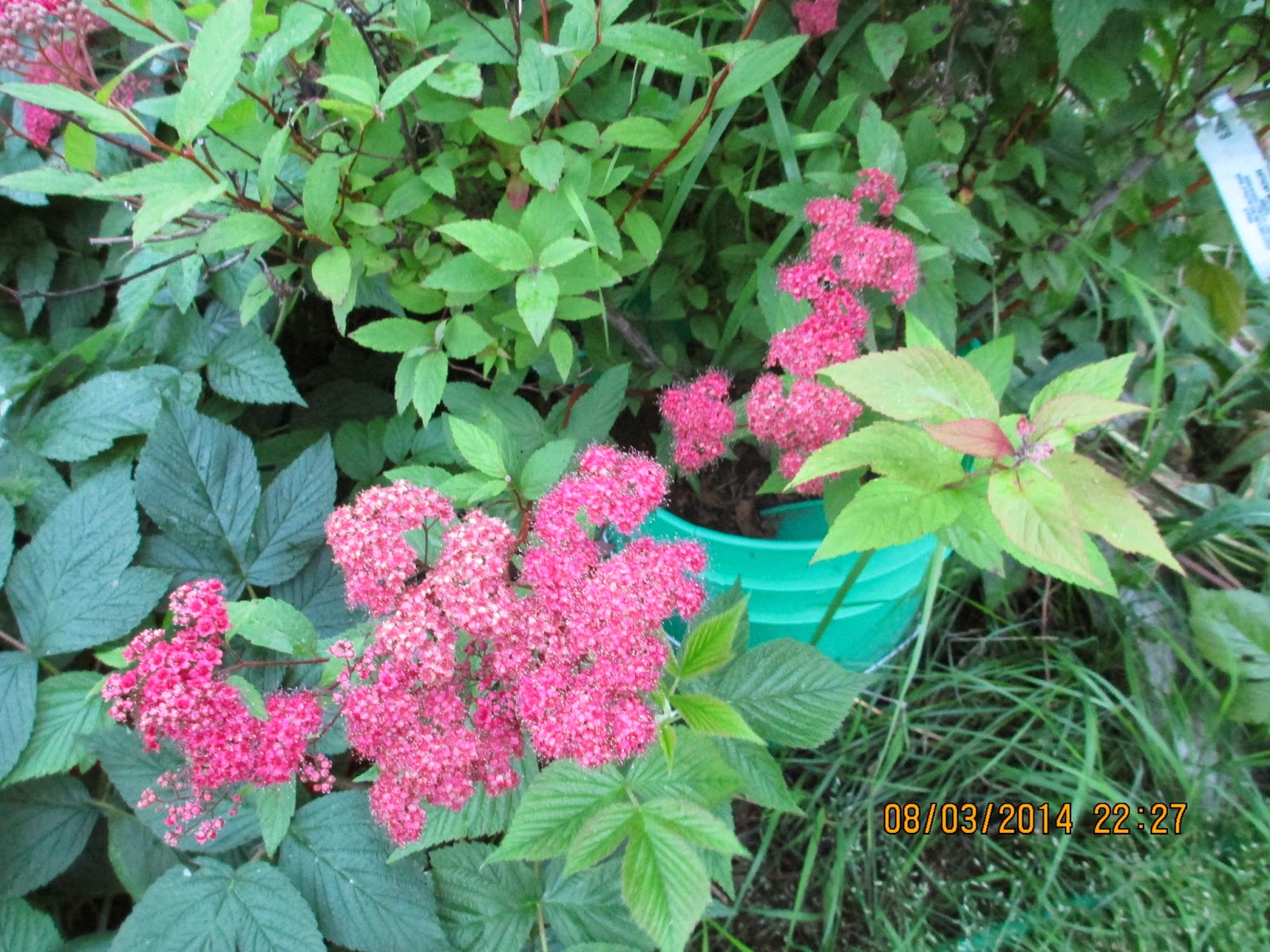