Blackberries continue to ripen . . . inside!

Just tasted our first Silvan blackberry this morning.  Another WOW!  Tasted strongly like boysenberry, but quite sweet, like the pancake syrup. Definitely worth keeping.  Unfortunately, this year it flowered July 15 (3 weeks after Wild Treasure, Siskiyou and Tayberry).  However, it appears to be somewhat frost tolerant and ripens well inside once the berries have turned red. 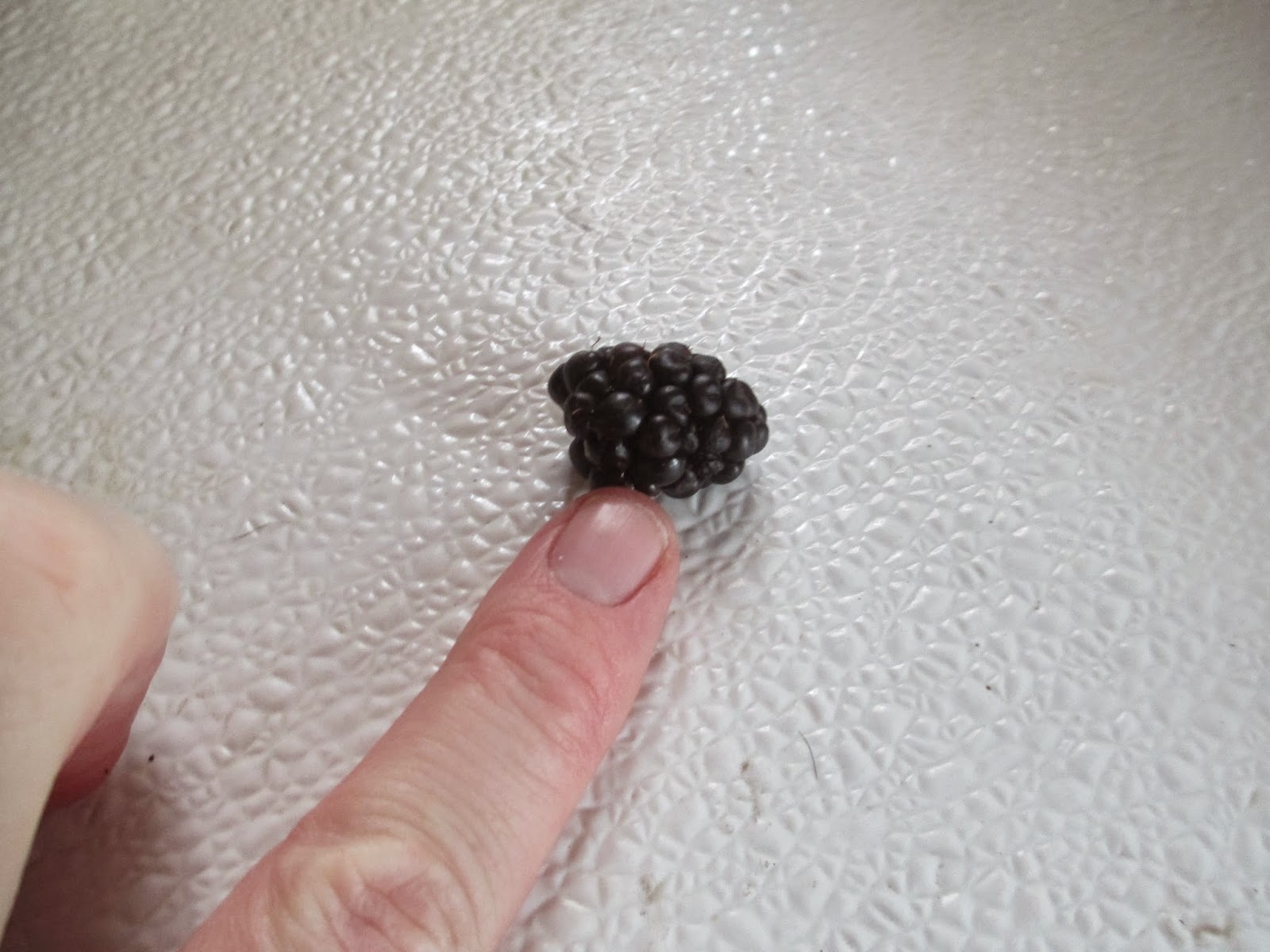 Both Silvan and Tayberry survived our first (and very early) frost of 29F on August 30th.  August 31st brought a low of 28F.  We saw the first snowflakes on September 3rd, but no snow accumulated.  Our wet weather (around 14 inches from June 22 through September 23) left for a few weeks early in September, but has returned. The first measurable snowfall came (0.5 inches) on September 23rd. Four more inches fell on September 30th and it is snowing today, with another 4 inches expected.  We had hoped to put row cover over the most promising blackberries and Tayberries before the first snowfall, but didn't get all of them.  We will try to cover the remainder this weekend.
We had planned to dig trenches and put all pots in the trenches over the winter.  However, the early snow has hampered efforts to get a backhoe up here, so we will be putting plants under the house again this winter.  Not ideal, but the best we can do.  The grapes and potted blackberries will be covered with plastic and straw under the hoop house frame (which discourages mama moose from trampling them) as we have done in the last few winters.  It seems to work okay.
Speaking of grapes, our brief (104 frost free days) and cool summer didn't help much in grape production.  We were, however, surprised to find a small cluster of Seneca grapes pretty close to edible on September 23rd.  Rather than being hard as a rock, they were sort of crunchy-soft and had a fairly typical grape flavor.  They were a bit tart (acid hadn't dropped yet) and not very sweet (low sugar).  This was quite a change from last year, which was longer and warmer.  Perhaps they are adjusting - and we modified our cultural practices to include both cluster thinning and berry thinning, so there was much less to ripen.  Nothing else was close to ripe when the temperature dropped to 23F on Sept. 24th.
Looking ahead to next summer, we have one Wild Treasure blackberry vine with one 10ft long cane and several 5-6 ft long canes.  Since the first flowers on each lateral to bloom are likely to ripen even in a cool year, we should have significantly more berries next year (this year we got 15 berries off of a total of 3 ft of cane).  I hope the Agribon-50 floating row cover that we put over Wild Treasure mid-September will help protect the canes through the winter and early spring.  We have already seen some dieback from the frosts on the Wild Treasure laterals, but with the snow cover, they should be better insulated.
We are also looking forward to more Tayberries next year.  This year, they were hit hard by Lygus bugs that stunted their growth.  Keeping those bugs under control will be the plan next spring.  Our two Tayberry plants have long (4-7 ft) canes on them right now and with protection, hopefully most of these canes will survive the winter.
We started to make an introductory video about the farm last month.  When the schedule gets a little less hectic, we hope to put it up on YouTube.  We will post here and on our website when that happens.
In the meantime, we continue to watch the snow fall outside and our blackberries ripen inside.  What a treat!
Posted by Aaron Stierle at 1:31 PM No comments: